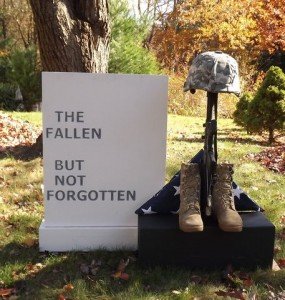 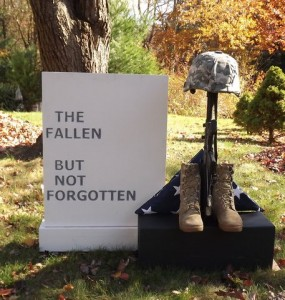 The Tomb Stone used in the ceremony represents the cumulative graves of every man and woman who has served and died for this country. The Battlefield Cross or Battle Cross is a symbolic replacement of a cross on the battlefield or at the base camp for a soldier who has been killed. The Soldiers Cross is made up of the soldier’s rifle with its muzzle buried in the ground, a helmet on top, dog tags hanging from the rifle and the boots of the fallen soldier next to it. The folded American Flag represents the people, of a proud and grateful nation, for whom the soldier fought and died for.

The practice of the Soldiers Cross started during the American Civil War or maybe earlier as a means of identifying the bodies on the battleground before they were removed. Today, it is an immediate means of showing respect for the fallen. Used less today as a means of identify the fallen but more as a private ceremony among those still living as a means to mourn, as attending the funeral is not always possible for soldiers still in the fight.